infoteam regularly participates in the conferences of the Professional Association for Trade Fairs and Exhibitions (FAMA). These conferences take place twice a year and are organised in cooperation with the German specialist publishing house, m+a.

The International Trade Fair Seminar is especially designed for trade fair organisers as well as businesses close to trade fairs and takes place once a year in the summertime. This is organised by the Syndicate of German Trade Fairs and Exhibition Cities (IDFA), the trade fair association, Expo-Event.Live Communication Verband Schweiz, in Switzerland as well as the Committee for Trade Fairs Austria.

We are already looking forward to participating at next IDFA 2022!

31st of August, 2019
EVVC General Meeting 2022 within the context of Prolight +Sound

As part of the annual general assembly, representatives of the European Association of Event Centres (EVVC) discuss in working groups major topics that are of utmost importance. infoteam will be attending the gathering as business partner.

Every spring the Association of the German Trade Fair Industry invites trade fair professionals to the Trade Fair Meet in Berlin. Representatives of trade fair organisations, trade fair suppliers, exhibitors and business visitors as well as politicians and the media are all present.

We are already looking forward to participating in 2022!

22nd of March, 2017
Plan intelligently with RUBIN Dates and Facilities and the layer principle

22nd of February, 2017
There are many reasons for a price discount – make them transparent with RUBIN Trade Fairs and Exhibitions Pricing Stability !

That is like a chocolate Santa Claus in October. Nobody is really in a celebratory mood yet. Even in November we are not really in the Christmas spirit and thoughts of fir trees, cinnamon cookies and roast goose are still in the distant future.
That is how curious we felt at first when infoteam met three weeks before the first Sunday of Advent and together shot videos for the Advent Campaign 2016. We had Christmas music playing at our entrance as a season‘s greeting. With her good sense for decoration, our good fairy and housekeeper, Lucy, created a pleasant atmosphere with chains of lights, small Santas and Christmas floral arrangements.

The kitchen, next to the fireplace room (usually the location for discussions and stand-ups), was also thought as the film location for the videos. By enchantment it turned into the “infoteam biscuit bakery”, with the aroma of spices and orange peels filling the air; where children diligently rolled out the dough to then apply the biscuit cutters to make Christmas figures.
Time just flew by and the videos got quickly “into the box”. The edit job afterwards was great fun for all of us . We did not cut a lot away, because we did not want any sterile clips, but rather real snapshots! We believe that that has succeeded and would be very happy if our customers enjoyed the videos as much as we. 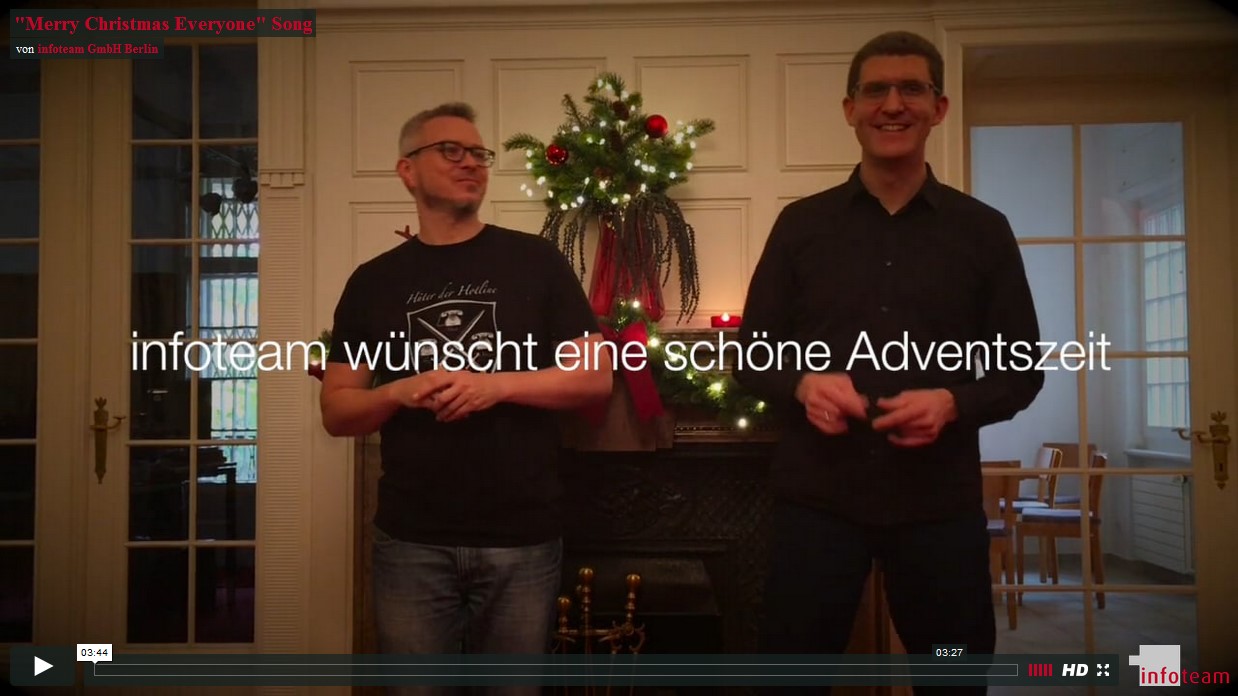 The 24th RUBIN User Conference took place in Nuremberg from the 6th to the 8th of September under the motto, “This is where the music plays”. A total of 130 participants got together in the Meistersingerhalle (Master Singers Hall) and exchanged their professional knowledge in an atmosphere of working together as colleagues and got to know the musical merits of Nuremberg.

Henning Könicke, Managing Director of the AFAG Mes­sen und Ausstellungen GmbH (AFAG Trade Fairs and Exhibitions) referred to the metropolitan area as the “Capital of RUBIN Users” in which three co-organisers worked together for the first time. The AFAG, the Meistersingerhalle and the Spielwarenmesse eG worked together with infoteam GmbH Berlin to ensure a most highly professional order of events along with organising an invigorating programme in a great atmosphere. The Meistersin­gerhalle, as the home of the “Twelve Old Masters” of  the Minnesang (courtly love songs of the 12th through 14th century), not only due to its motto, but particularly due to the professional team on site, turned out to be an ideal location easy to get around in.

Deploying the open space conference methodology, a total of 23 workshops were organised by the participants themselves and were characterised by open and lively discussions. In view of the variety of RUBIN topics in and around trade fair and event management the users were able to profit from the processes used in other companies, were able to exchange their experiences and were able to garner impulses for their own practical applications. The professional knowledge regarding various customer-specific means of implementing RUBIN that the RUBIN consultants made available underscored communication, to the extent that the prerequisites for the deployment of individual functions for the relevant application case could be illustrated.

Not only the communication in the workshop sessions, but also the joint effort of the co-organisers reflects what Robert Vogel, Head of the Meistersingerhalle, described as a “symbiotic partnership based on trust” between infoteam and its customers, but primarily also denotes this partnership amongst the companies and users: “It is not a gathering of competitors, but in actuality RUBIN users who openly exchange their experiences for their mutual benefit”.

The community thought as a modern term for that which is the core of the infoteam company philosophy, also crystallised in the final round on the last day of the conference. For this Christoph Herlitz, CEO of infoteam GmbH Berlin, made use of a basic assumption on the success of communication espoused by Paul Watzlawick: “The relationship guides the matter and not vice versa”. True to this knowledge the approachable interchange among partners was the prerequisite for the excellent professional results.

Graz. On the occasion of implementing RUBIN at the Messe Congress Graz (MCG) all of the project participants met on 24 May 2016 for an all-day kickoff event in Graz to jointly organise replacing the present system with RUBIN. With a rather atypical approach for this industry, the scene was set for MCG and infoteam GmbH Berlin to successfully work together.

When implementing software that is critical for the business, special challenges and risks arise: intensive migration work, limited resources as well as unrealistic timelines may affect the core processes. This is often compounded by staff resistance resulting from their bad experiences with IT projects in the past.

infoteam is an IT service provider well aware of these hurdles with 30 years of industry experience at its beck and call and has a great repertoire of methods that ensures project management that is customised to the customer. The modern presence workshop has proven itself by involving the participants from as many different departments as possible in the management, applications and software development in this project. “This ‘magic triangle‘ often harbours the actual stressors and stumbling blocks“, stated infoteam’s Managing Director, Christoph Herlitz.

This was exactly the purpose of the kickoff workshop, to learn from them: why have IT projects failed in the past or did frustration outweigh motivation? How can stress be avoided and motivation enhanced? The answers to such questions from all participants were reflected upon and recorded to become the rules for working together. “This generates benefits from bad experiences”, according to Mona Thissen of infoteam.

infoteam not only treats system implementations as IT projects, but also as communication and organisation projects. This is mirrored in the approach that infoteam customers appreciate. This approach was also successful in Graz, as corroborated by Martin Ullrich, Head of Finance & Personnel at MCG: “With this special method infoteam has once again confirmed its professionalism and has demonstrated: There’s a better way! We are very much looking forward to working with infoteam in the future.”

From the lighting over the electrical connections and the flooring all the way to the trash disposal, a trade fair sinks or swims with the suppliers that turn the stands into attractive and functional places for visitors and exhibitors alike. According to the “6R” rule, all have to have the right services, at the right place, in the right quantity, in the right quality, at the right price for the right customer. Service partners are thereby a core link in the value chain of a trade fair.

The RUBIN Online Service Centre Service Partner MobileClient is solely designed for this core group. With a tablet application that can be intuitively used, assemblers and fitters can work directly with RUBIN on site. The process begins in the “stationary” RUBIN and transforms into a mobile solution exactly when quick access to data and information is needed.

Additional services that the exhibitor has booked for the respective trade fair stand are – as usual– ordered through RUBIN. With RUBIN information can be accessed through the respective service partner’s app. That means that the assemblers and fitters can now access information with a tablet directly at the trade fair stand. Communication between the assemblers on site and trade fair organisers is quick and easy, whereby any changes to orders or equipment for a stand can be made with a signature on the tablet as confirmation. Processes can thereby be accelerated; and time-consuming and costly modifications can be avoided.

With the expansion of the RUBIN Online Service Centre and the corresponding hardware (tablets), all service providers can then be directed with one integrated IT solution. The Service Partner MobileClient is now available to all of our present customers.